So … there’s definitely quite a lot of stuff happening here at the end of the world on a tiny lovely island called Koh Phangan.

First of all there was this warning about Muifa, a typhoon coming from the Philippines, just right before the monthly Full Moon Party top act at world famous Haad Rin beach. According to the media Typhoon Muifa was supposed to hit Koh Phangan area the 25.th of November with lots of rain, giant waves of up to three meters in height, etc, etc …

The media did well and everybody was really scared and even Becki went on a big shopping trip to fill up his fridge with lots of tasteful stuff. Well … you never know if you will be able to go shopping again. Typhoon Muifa might probably blow all these shops away in only a couple of seconds, isn’t it 🙂

But at the end of the day nothing actually really happened and it was just like another rainy afternoon in London with a bit of a strong wind. Like my friend James told me the other day – by the way … he’s British :-). So … somehow this massive typhoon Muifa decided to transform itself into a ‘normal’ tropical storm and furthermore also decided to change its moving patterns and took a new direction more close to Suratthani on the mainland. As far as I heard there were some damages but nothing too serious …

The boat transfer to Koh Phangan was canceled for about 2-3 days and some party hungry humans and/or aliens might got stuck there on the mainland probably thinking most of the time about sex, drugs and rock ‘n roll …Ecstasy, Acid, Bacardi Breezer, techno trance and getting late!

I had a very good sleep the Full Moon night and arrived at the party scene about 7 a.m. Fresh as a daisy and equipped with my digital camera on the hunt for the newest party shots. The Full Moon Party in November 2004 was doing great again. Not so many people as most of them probably got stuck somewhere on Koh Samui or Suratthani on the mainland. The morning sun was shining bright and lots of smiling faces at the beach. Smelled a bit like really good ecstasy on the island at the moment what would explain all the smiling faces 😉

But also have to tell you that I saw some really, really sick faces overdosed by something only God or Buddha might know! Hey guys the big secret is called MODERATION! Don’t over do it! It doesn’t make you happy. Take a look in the mirror and decide yourself 😉 True happiness cannot be achieved with something external. That’s only temporary! Instead find your inner happiness and then there’s no more need for external substances. These chemical helpers are here for a good reason. To open your mind for new ideas … to show you a direction you’ve never been thinking about … to show you possibilities you thought they couldn’t exist! But you have to walk the path by yourself. No chemical pill can do that for you 🙂 What was the title again of one of those Beatles songs … ALL YOU NEED IS LOVE!

Hoo … and I got good news for my friend DJ Flux from the Backyard DJ community! Just went Backyard again at the morning and this time Becki was very surprised about everything there. The music, the party, the people … it was just great 🙂 Nice smooth housy morning music with a tiny bit of trance played by a ‘farang’ DJ. That must have been the reason, isn’t it? At least DJ ‘A’ wasn’t turning the tables – hehehe 😉 It was really a good after party there at Backyard Club and Becki even made a couple of movie sequences. So finally sometimes Backyard is indeed a very good place for some very good time 🙂 And NO – Becki didn’t take any mind altering substances ….

All the rest down the beach pretty much the same as usual. Only most of our Hebrew community friends were sort of missing this time. Is there another war in Israel again?

And before I forget it! Loy Khratong Thai festival was also taking place this Full Moon – even here on Koh Pha-ngan! “Loi Krathong” is traditionally performed on the full moon night of the twelfth lunar month, which usually falls on some day in November. The floating of a ‘Krathong’ – a banana–leaf cup – is intended to float away ill fortune as well as to express apologies to Khongkha or Ganga, the River Goddess.

So let’s hope that all our ill fortune, bad luck or anything else is floated away by now … 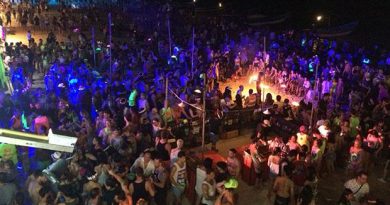 7 thoughts on “Koh Phangan Full Moon Party at Had Rin beach, a typhoon called Muifa and the Loy Krathong Festival”