Recently, while enjoying my republican café latte at the democratic Buakao Inn, some also know it as A’s Republican Coffee Shop, in Thongsala main town on Koh Pha-Ngan Island, Becki was stunned again about the marketing department of the TAT, the Tourism Authority of Thailand!

Finally, after many intensive and creative hours with the marketing directors from the TAT and other agencies for public relations, probably spending millions of tax baht for this brainiac research project, the Tourism Authority of Thailand announced their brand new slogan for the year 2007 to attract more and more wealthy tourists coming to the land of the holy smile 😉

UNFORGETTABLE THAILAND – that’s the final new slogan of the TAT for the year 2007! Obviously not as fascinating as this old and fuddy-duddy ‘Amazing Thailand’ slogan but at least you’re not supposed to forget any impressions of your stay in the Kingdom of Thailand and its smiling faces in 2007!

However … let’s also have a brief look at the current general political situation in the Kingdom of Thailand and how this also might influence the number of wealthy tourists planning to visit the country with the charming smile … the unforgettable Thailand 2007!

Country is in Crisis! That’s the headline of a commentary written by Thongbai Thongpao and was published a couple of days ago by The Nation, one of Thailand’s main stream newspapers. Well … why is Thailand in a crisis?

A representative of rural doctors said, Thaksin, the Caretaker of Thailand, should listen to medical opinion suggesting his mental health was questionable, rather than trying to punish the state psychiatrist who offered it. – The Nation

Why is Thaksin’s mental health questionable? Well … a couple of days ago all the mainstream media in Thailand was infiltrated with the shocking news headline that the Caretaker of Thailand, Thaksin Shinavatra, received a bomb threat with massive explosive devices from some high junior military officers who tried to assassinate Thaksin, the care taker of Thailand with that so called questionable mental health status!

Then a couple of days later the mainstream media freshly reported that the whole explosive ‘Let’s assassinate Thaksin’ story was just a joke … a hoax … a setup by the Thaksin administration to bring back some support from his sympathizers!

Is that now the end of ‘Amazing Thailand’ or is it the beginning of the new ‘Unforgettable Thailand’ in 2007?

People discerning about media – The Nation

Also worth mentioning is Thaksin’s ‘Black Magic’ activity! Somehow the mentally disabled Caretaker Thaksin believes that his enemies have cursed him with some magic spells, which are actually responsible for his ever decreasing popularity. Therefore the care taker Thaksin Shinavatra regularly visits some magic temples with some magic chickens to celebrate some even more magic rituals with some bloody magic sacrifices to finally get rid of that bloody magic spell which cursed him in the first place!

Or could perhaps Mr. Thaksin’s ever decreasing popularity have something to do with some massive tax fraud a couple of months ago? We are talking about billions of Thai Baht in that case!

However … unforgettable could also become your stay in the deep south of Thailand! Book some sudden death tickets in the next closest travel agency for the provinces of Yala or Pattani close to the Malaysian border. Just recently you could have enjoyed the nearly simultaneous strike of about 20 explosive devices which blew off some government banks in the province of Yala in the south of Thailand!

Isn’t that amazing? Perhaps unforgettable? Well … what’s happening there? Why do they blow up government institutions? Who are they?

They are a so called Muslim minority who came to the land of Siam a couple of hundreds years ago. Inspired by the charming smile and friendliness of the Siam at that time they decided to settle there and live a peaceful life amongst other Buddhists. With them they brought their own culture, religion, language, education system and so on. Things were great back then and no bombings or any other nasty explosive devices could disturb the peaceful life in the deep south of Siam.

Suddenly … after 9-11 … when the western world finally discovered the ‘Axis of Evil’ to mainly be strangely looking, turban wearing, bearded humans in so called ‘Islamic Cells of Terror’, life immediately seriously interrupted in the deep south of Thailand.

The so called democratic Thai Government came and finally decided that they have to shut down their Muslim mosques, their schools, their language and their culture! After hundreds of years these Muslim minorities in the south were no longer allowed to live and express their culture in any way. Instead they were simply just forced to convert to holy Buddhism!

But things get even better! Just after the recent Yala bombings in the deep south of Thailand, the SS Army Commander-In-Chief, General Sonthi Boonyaratkalin, announced in public:

‘Free the military and let it do the job. And when things happen, everyone must give them moral support!’ – Bangkok Post

And again! Amazing? Unforgettable? A third Reich Nazi fascism state? Then also recently another headline popped up in the mainstream media and was published by The Nation.

Thailand could become a ‘Failed State’! – The Nation

What the heck you might ask yourself is a ‘Failed State’? Some private investigations finally revealed the status of a ‘Failed State’ whose definitions were given by the United Nations:

So … as everything is out of control and unreliable … with a black magic chicken killing caretaker of Thailand … participating in bloody satanic rituals … a SS Army Commander-In-Chief who desperately only just wants to do his job … and the paralysis of the government … it’s probably a good time for a new election campaign!

Therefore recently the senate picked some new candidates for the new Election Commission who’s supposed to supervise the upcoming election for the new government, which was actually postponed again and should eventually take place in the next couple of months … perhaps years?

Okay … been there … seen that! Just don’t get any government critics in any election commission so you can finally present any election results the way you just want to present them! Yeah … yeah … we got that!

What about these new election commissioners? Are they professionals? Do they know how to do their job?

I will perform my duty as best as I can even though I do not have experience in organizing the election. I’ll learn about the job as fast as I can because time is running out. The election must be postponed, but not later than one month – Apichat Sukhakkanon, EC commissioner-elect – Bangkok Post

By the way, Becki is also looking forward to the introduction of that safe and secure E-Voting system like they use it in the United States of the New World Order! Of course, without any paper trail as prohibited by the government 😉

The main question is … how can you still make people to believe all that shit and vote for you? Well … that’s easily done! You just promise them something 😉 On top of the promise list at the moment is that new railway system network around Bangkok area. First introduced by the democrats, offering a new, stunning and improved railway system around Bangkok covering 100 km of track and very affordable prices as cheap as 15 Baht per person!

Then came the ruling republicans, the ‘Thai Rak Thai’ party, offering 300 km of track and astonishing prices as low as 10 Baht per person!

Then came the next headline …

Ruling party touts 333 km of track in 4 years, warns of delay if not voted back into office – The Nation

Well … who is supposed to believe all that shit?

And then last night Becki was stunned by another news article in some German newspaper on the internet. The government held again some marvelous elections in a province in Germany, called Nordrhein Westfalen, and the stunning news was that less than 50% of the population of that province actually went to that election to give their vote to one of those corrupt politicians! In some counties the election participation was as low as 20-30%! Eat that 😉

This reminds me of that other thing: ‘Imagine there is war and nobody goes there!’

However … what does our beloved Majesty the King of Thailand think about the current situation that Thailand is on its best way to become a so called ‘Failed State’?

God bless you all! 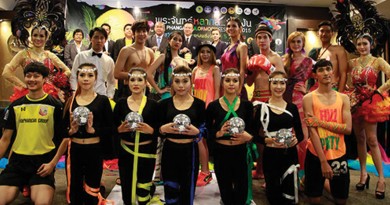