Skip to content
You are here: Home > Party Zone > Koh Phangan Party Island and the Return of the Shiva Moon Party Knights

And again … it’s not ALL of them ! I don’t want to generalize things here about any race as there are still some really nice local Thais here on beloved Koh Phangan Island but like I said earlier it gets more and more hard to find these ancient humans!

So … back to the locals from Baan Tai / Baan Nuea village and the Shiva Moon Empire. Efforts have been made and a village chief messenger has been sent over resulting in no change or whatsoever! The Shiva Moon Party is still running as the money flows and most people here in our village are mostly just pissed off with the Shiva Moon situation!

There are hundreds of people living in that village. Why don’t they use their group power of a whole village and do something against it, you might ask?

First of all, Thais were brought up to just simply keep their mouth shut! “Chai Yen Yen” they call it, the chilled, tempered, relaxed heart! A nationwide cultural inducted attitude mainly resulting in suppressed emotions, which will then, eventually explode at a specific point in their life, resulting in gun fights, shooting and killings. That’s what they then call the “Chai Roon” attitude, the hot, insane & exploding heart! And it’s a bit sad to see that they never make the connection between these two things.

Another quite interesting thing here on Koh Phangan Paradise Island is something I would like to call “Pee gap Noong” shit!

Pee means the elder and Noong means the younger person. Pee gap Noong in that term is mainly used to describe their family relations from one to each other. And in Becki’s personal theory about the history of Koh Phangan there must have been only one single mail and one single female person in the very beginning! Because after many, many years on the island Becki finally figured out that they ALL are somehow family relatives to each other! Wherever I go with my Thai grandmother here on the island, she talks with other locals for a couple of minutes and finally they figured out that they indeed are family relatives to each other. It’s still an island miracle to me, but on the other hand there’s also proven evidence in many areas of this island.

As western science discovered many years ago, it’s not a good thing to have sexual intercourse with your sister or perhaps your cousin, as this could eventually result in some genetic abnormalities. In German language we call it Inzest and my dictionary just popped up the term of ban of inbreeding! Well … sounds quite awesome ban of inbreeding and if you possibly forget about that ban of inbreeding for perhaps 15 or 20 minutes with your sister or cousin alone in a dark, steamy room, this could probably result in something called Dorfdepp in the German language.

Whoa … Becki is indeed NOT saying that the island if just filled up with a bunch of inbreeding village morons! NO! But you can find some samples in nearly every village here on beloved Koh Phangan Paradise Island. Just keep your eyes wide open!

Anyway … if we have a close look at human history and believe in the holy bible, then at the beginning there was Adam & Eve, it says! There was no Mike! No Sophie! No Patrik and no Rachanee! And if we meditate about that fact for another 1.7 seconds we have to find the shocking conclusion that we ALL are just a bunch of inbreeding … creatures 🙂

But back to the Shiva Moon Knights and the villagers from Baan Tai and Baan Nuea!

There are hundreds of people living in that village. Why don’t they use their group power of a whole village and do something against it, you might ask?

First of all the people here ALWAYS need a guide, a headman … a leader! Unfortunately, their leader, the village chief Phu Yai Baan, is constantly on secret missions in Bangkok, Suratthani, Koh Samui or Koh Tao and rarely can been seen in that village where he was elected to represent the needs of the local people.

Then from time to time someone from the local community tries to speak up at their monthly village meetings, but there’s always a Shiva Moon Knight present to stop any complaints in an aggressive and frightful manner from the very first beginning!

Additionally there’s this Pee gap Noong shit that makes nearly everyone in our village a family relative to the Shiva Moon Empire! And, of course, you should always respect your family members, isn’t it?

Then finally the villagers fall back to this Chai Yen Yen attitude and probably pray to the holy lord Buddha to send them some additional help, probably not in the form of a money loving nun.

When will the people finally discover that the real power just resides inside them?

Imagine hundred villagers united by their inner will power! Imagine how easily anything could be achieved without the need of a leader!

What are people so afraid of? Are they afraid of the real power which actually resides inside them? 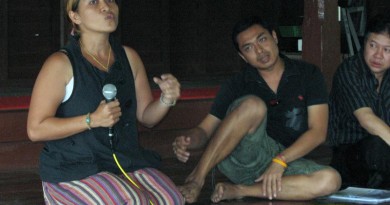 Koh Phangan police will propose scrapping the Half-Moon Festival and Black-Moon Party due to safety concerns!