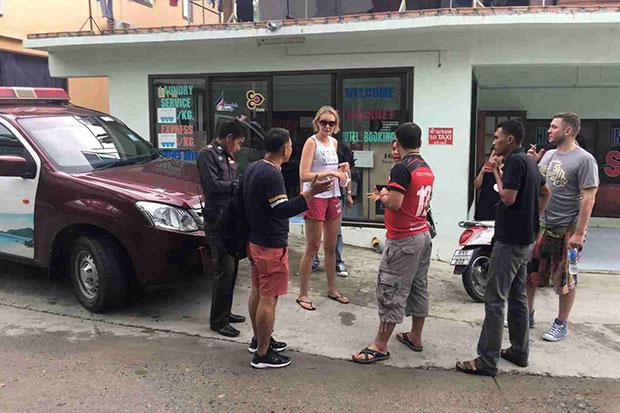 A police officer and four accomplices have been accused of the assault and extortion of a Russian couple holidaying on Koh Phangan whom they had falsely accused of possessing drugs.

Ekaterina Lobanova, 35, and her husband Anthon Lobanov, 36, on Wednesday told police they went to a nightspot on Had Rin beach of this popular island on Tuesday night.

On the way back to their accommodation they were approached by two men who offered to sell them illicit drugs. They refused.

The men then offered them a taxi ride back to their room and they accepted the offer. But on the way to the taxi, three more men emerged and claimed to be police officers. The couple said they were handcuffed and told to get inside the taxi, which was on the Au Thong Nai Pan route.

The men then demanded money from them in exchange for dropping charges of illegal possession of drugs, the tourists said.

Ms Lobanova said she told them that she had no money. One of the men then punched her in the face, took her iPhone 6 and other valuables worth about 30,000 baht.

The gang abandoned the Russian couple on Ban Thong Nang Road in tambon Ban Tai, where they sought help from local people, who took them to Koh Phangan police station to file a complaint. On Wednesday they returned to give further details of what happened to them.

The investigation led to the identification of five suspects. They include Pol Snr Sgt Maj Suriyan Ranjuan, 50, of Koh Phangan police station.

Koh Samui provincial court on Wednesday approved a request for arrest warrants for the suspects on charges of colluding in extortion, assault and illegal detention.

Three of the men, Mr Thanin, Mr Apidet and Mr Thaweesin, turned themselves in on Wednesday.

Mr Thanin denied any involvement, while the two others confessed to having offered to sell “drugs” to the tourists, but claimed it was really a common painkiller ground up to fool tourists into paying for it. They denied assaulting Ms Lobanova.

Thank you to Bangkokpost “Cop accused in assault, extortion of Russian couple ” which was brought to us by Google Alerts.