Skip to content
You are here: Home > General News > Thai Rak Thai – The Empire strikes back!

Thailand’s elections for 2005 are finished and the winner is called ‘Thai Rak Thai’!

And again, for another 4 years period, the ‘Thai Rak Thai’ party around Prime Minister Thaksin Shinavatra got re-elected. ‘Thai Rak Thai’, which actually means ‘Thai Love Thai’ or perhaps NSDAP, has won 376 seats in the parliament and is the single-party government for the next legislation period here in Thailand. So is it good news? Or bad news? Or what should we just think about all this? What sort of consequences does this have for Thailand and also the Tourist Industry?

Will Mr. Thaksin’s dream of ONLY superior high class tourism come true? What is he actually really doing on Koh Chang at the east coast of Thailand close to Cambodia? What are the REAL plans of the telecommunications tycoon Mr. Thaksin Shinawatra?

Mr. Thaksin was born into a well-off Chinese-Thai business family in the northern city of Chiang Mai. He joined the police upon graduation from high school and later earned scholarship to American university (Bush Connection!) for graduate degrees in criminology. Northern are known among other Thais for both their graciousness and their arrogance 😉

The Bangkok Post says ‘People worried Thaksin may become more autocratic!’ A commentary in ‘The Nation’ on Monday predicted Mr. Thaksin would next move against English language newspaper like ‘The Nation’, which has remained critical of the prime minister, unlike most Thai language media.

Is he probably also already planning to move against Koh Phangan’s one and only Island News Magazine? Uncensored, Uncovered & Uncorrupted 😉 The awful truth!

In the deep south of Thailand, where Prime Minister Thaksin Shinawatra killed a few hundred Muslims in the last couple of months, there seems to be a clear signal of dislike for Thaksin’s politics. Therefore the PM Thaksin has postponed his trip to south Thailand citing a bad cold 😉 ‘Thai Rak Thai’ has won only one single house seat out of the 54 seats in the southern provinces. So there seems to be at least some brain down in the south!

However … Koh Phangan’s Terrorist Attack Security Alert System is online 24/7 and running smooth. The islands threat level is SEVERE RISK like usual and our undercover agents are on HIGH ALERT!

But no worries … we will keep you de-formed 😉 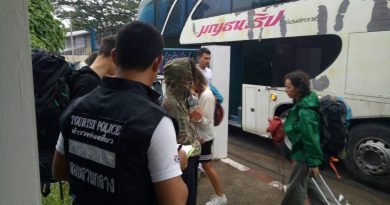