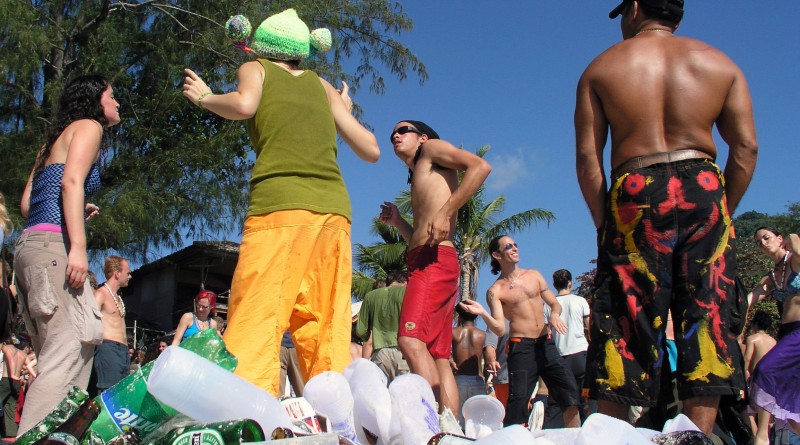 The legendary all-night Full Moon Beach Party on Paradise Island Koh Phangan in the south of Thailand ended with scenes that will shame many of the wealthy westerners who took part.

This shocking photo shows the disgusting scene on Hadrin beach following a Full-Moon Party on Koh Phangan Island. The legendary all-night Full Moon Party ended with the beach covered in a sea of plastic rubbish left by those who took part.

This scene, reportedly taken on the island of Koh Pha-Ngan, will perhaps shame many of the wealthy westerners who took part in the event, which is mostly attended by tourists. The rubbish was apparently left for locals to clean up.

The picture has gone viral after being shared on the internet by ‘Ocean Defender‘, who described the scene.

“This is the aftermath of a full moon party on Koh Phangan Thailand. For the love of Poseidon how can you celebrate the moon and trash the ocean?

“The saddest part about this picture is the fact that the great majority of the people attending these types of “parties” are people from developed countries, tourists with out consciousness. Don’t be a part of the problem, be a part of the solution!”

This message was backed by Thai resident Panutcha Bunnag, who said: “Real full moon is you sip the cool beer sitting and watching the beauty light of the full moon at the beach. What’s fun in dancing, drinking, using drug, naked, sex, puke, unconscious till morning and left the shit behind?”

Full Moon Party is a mainstay for backpackers from the UK and many other countries who visit Thailand, but has attracted criticism from some for the litter that is left on the beach and the noise and disruption for some locals.

Thank you to Sam Adams and Mirror “Full-Moon Party in Thailand ends with disgusting scenes as revellers leave beach covered in plastic rubbish” which was brought to us by Google Alerts.