For Australian tourists travelling to Thailand there’ve been warnings about terrorist threats and political instability, but nowhere has the travel advice contained warnings about fatal jellyfish stings.

One Australian man is working hard to change that after his son was nearly killed by a box jellyfish while the family was holidaying at a Thai beach on Resort Island Koh Samui.

This interview is taken from website of Australian Broadcasting Commission’s Radio National – where you can also listen to the audio.

Elizabeth Jackson: For Australian tourists travelling to Thailand there’ve been warnings about terrorist threats and political instability, but nowhere has the travel advice contained warnings about fatal jellyfish stings. One Australian man is working hard to change l that after his son was nearly killed by a box jellyfish while the family was holidaying at a Thai beach on famous Koh Samui Island.

Kirrin McKechnie: Last Summer, Andrew Jones took his young family on a dream holiday to Thailand. But when his four-year-old son Lewis was stung by a box jellyfish while swimming off a small beach, things quickly became the stuff of nightmares.

Andrew Jones: All of a sudden he stopped and screamed a really horrible scream, I never heard it before and I never want to hear it again. So I just raced out into the water and pulled him out onto the beach and he was absolutely hysterical and it was really only, it took a little while to register that it was in fact a jelly fish. We had a pretty traumatic time from that moment on to try and firstly save his life, as he ran in to a spot of bother, he went straight into cardiac and respiratory arrest.

Kirrin McKechnie: A quick thinking chef from a nearby resort threw vinegar on the four-year-old’s wounds. It saved the little boy’s life. Andrew Jones says he would never let his family swim off the North Queensland coast because of fears of stingers, but he had no idea the waters around Thailand were just as dangerous.

Andrew Jones: And the horror of it was the fact that we knew nothing about there even being box jellyfish in this area; there’s no signage, obviously this is Thailand. But there’s no warnings from anybody there that they might be around, whereas you see lots of warnings in places like Queensland and the Northern Territory. The box jellyfish is renowned to be probably the most venomous creature on the planet and when it wraps its tentacles around a little four year old it can cause some serious damage. So in actual fact he’s lucky to be alive.

Kirrin McKechnie: Since then, Andrew Jones has launched a dedicated campaign to make the beaches of Thailand safer. He’s travelled back to Bangkok, holding meetings with the Thai Government, local scientists and consular officials from Australia and other big tourist nations. He says his biggest hurdle in raising awareness of stingers has been a massive resistance from tourism operators, worried about the bad publicity.

Andrew Jones: Several years earlier, 2002, a Melbourne man had been stung and actually died on Koh Samui and the authorities there actually tried to cover this up. There were signs put up on the beach warning tourists of the problem, but all the local operators pulled those down.

Kirrin McKechnie: But last year Mr Jones teamed up with jellyfish expert Lisa Gershwin and the pair have made real progress. As the curator of natural science at the Queen Victoria Museum in Launceston, Lisa Gershwin says the key has been knocking down cultural boundaries that made fatal jellyfish stings go undetected by Thai authorities.

Lisa Gershwin: I don’t think it’s that they ignoring the problem. I think it’s that they simply didn’t know. Most of the people getting stung in Thailand are either fisherman in little villages and they don’t require death certificates and there’s kind of a cultural thing that if you get killed by the ocean it’s because you pissed it off. So there’s these cultural beliefs and local customs that don’t really make jellyfish fatalities something reportable. 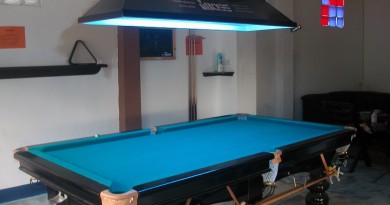 Total Lunar Eclipse during sunset on the Island of Koh Phangan