Skip to content
You are here: Home > Restaurants > Same-Same Burger House – The Empire expands on the Island of Koh Phangan 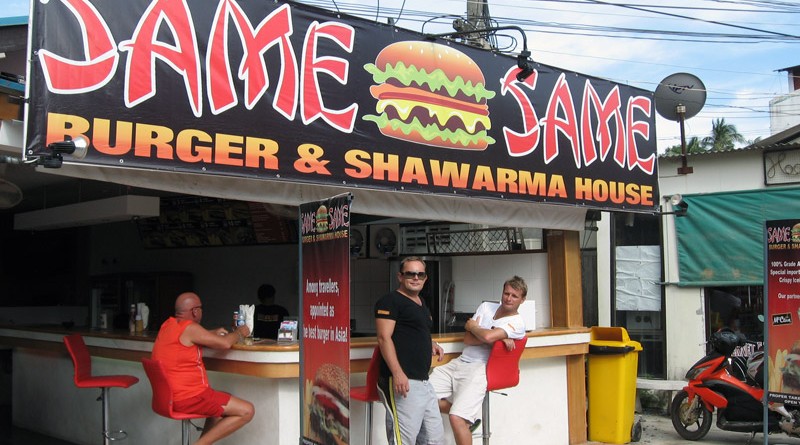 All burgers are also available as ‘menu’ which gives you some extra french fries plus a drink of your choice. Additionally there’s the Shawarma pida bread with marinated and grilled beef garnished with iceberg salad, tomatoes, onions and toped up with some homemade yoghurt dressing.

Koh Phangan Same-Same Burger House prices start as low as 180 THB for a classic beef burger and for the more fanatic junk food addict there’s always the option of the X-Treme bacon and cheese burger starship including all the bells and whistles for a very affordable 420 THB only.

Our Koh Phangan Island News team of investigative douche bags led by Senior Food Specialist Fred van den HiChicksStillLonelyPleaseDial0811466981 decided to go for the double cheeseburger menu and received quite a pleasant burger experience. The cheeseburger itself was excellent, tasty and very well done. Though the liberty fries were unfortunately totally over salted and should be looked after. Furthermore missing was the ice for the drinks as things tend to warm up quickly in the tropics. And there’s nothing more unpleasant than a 30 degree warm coke, isn’t it?

However … our friendly hosts and general managers from the Same-Same Burger House, Soeren and Jacob, then guided us through the Same-Same Burger House premises and Koh Phangan Island News headquarters could easily convince themselves that all standards of hygiene, food preparation and storage were successfully met. Storage and preparation facilities, restaurant, kitchen and equipment were flawlessly clean and looked after so really nothing negative to report here.

Apart from the salty liberty fries and the warm coke Same-Same Burger House still deserves two thumbs up and is definitely worth a visit should you fancy a real 100% beef burger. The earlier mentioned comments by anonymous competitors that Same-Same burgers simply give you the shit cannot be reconfirmed by Island News headquarters and should therefore be seen as pure island gossip almost certainly created by greedy and unsuccessful business competitors from the Hadrin community.

The Koh Phangan Same-Same Burger House is located at the sunset side of Hadrin Beach close to the pier to Koh Samui and is open every day until 5 a.m. and during the infamous Full Moon Party Night 24 hours. 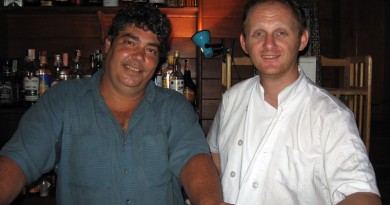 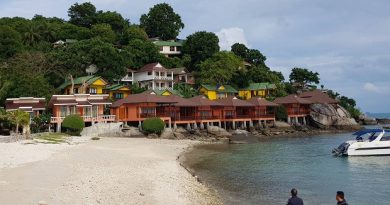