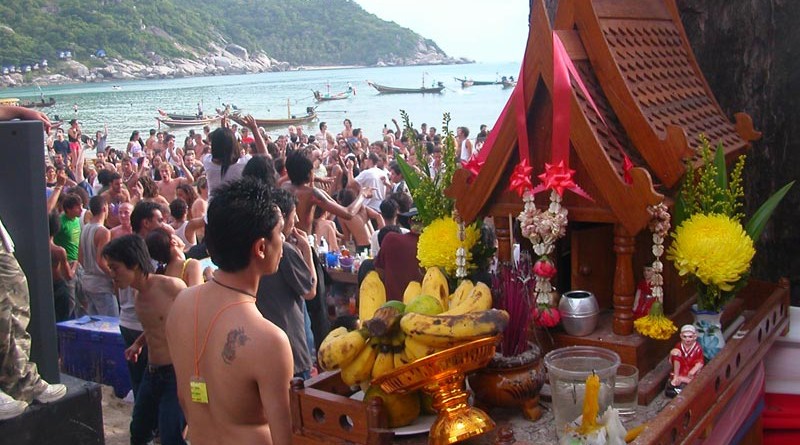 And again, like every month on Koh Phangan in the Gulf of Thailand, it was time to get wasted and totally pissed. Come and satisfy your soul? At the Full Moon Party? Yes, take the blue pill!

On my recent flight from Bangkok to Koh Samui there was this friendly voice from the airline speakers telling me: “Ladies and Gentlemen, to your right Haad Rin beach Koh Phangan. Place of the worldwide known and world famous Full Moon Party!”. Well, that’s a nice bit of advertisement from Bangkok Airways.

Anyway, the road improvement project Hadrin Beach seems to be nearly finished and Becki had a smooth ride. Downtown party zone Had Rin beach mostly everything like expected. Though I have to mention some things were under progress. First of all that newly improved Police Service Unit – “WE CAN HELP YOU!”

The Full Moon Police Headquarter got a system upgrade. They have a cage now, where they put all the gangsters in. That’s awesome, isn’t it? A Gangsta-Cage 😉 Unfortunately Becki was not allowed by police officials to take a closer shot. But you can have a look in the picture gallery! This month in the Gangsta-Cage we had some lady boys with a lot of money in different currencies, multiple visa cards, a few mobile phones and finally some of those tiny digital cameras, police officials announced. Well, do you think a lady boy can afford all that stuff? Of course not and that’s the reason why they end up in the Gangsta-Cage.

Also local party zone drug suppliers are not satisfied with their business. The sales figures of the last quarter show a massive and sudden drop for psychedelic hallucinogens like our good old friend LSD. It’s very hard to sell on the consumer market at the moment, a reliable source said. Blue pills, red pills! Ecstasy in all its different shapes and colors is still quite popular at the Full Moon Party. But what really worries us … WHAT REALLY WORRIES US … more and more people start drinking! Alcohol! Can you imagine that?

What has happened to the spirit? No more time for a psychedelic experience?

Well, one place you definitely don’t need any drugs or whatsoever at all is the ‘Battle Field TECHNO’ at Zoom and Vinyl. Becki still thinks that it is possible to become really sick if you stay there longer than 20 minutes. Hard and progressive techno! Can music influence your body and mind? Masaru Emoto – does this ring a bell? How’s about some animal testing? Wouldn’t that be another challenge for the PAC Phangan Animal Care?

However, the Full Moon Party Zone was packed again. Thousands of people seemed to have a good time enjoying themselves. Dancing under the Full Moon at the end of the world on a tiny island called Koh Phangan. Wish you good luck 😉 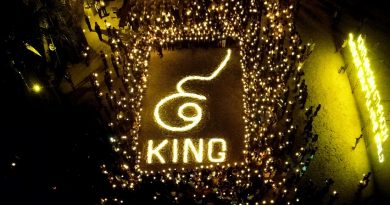