Colin Hinshelwood is a Scottish journalist living in Chiang Mai, Thailand. He attended the first Full Moon Party on Haad Rin Beach in 1988 and shared his memories with TIME.

The first ever Full Moon Party on Koh Phangan was in October 1988 and I was there. However, there are a couple of things that need qualified before we romance the shit out of that night.

First, we were doing Full Moon Parties on Chaweng Beach, Koh Samui, for about six months before that — maybe a year. I had a restaurant-bar on the beach and was the only farang [foreigner] with a business there at the time. We had a generator like all the other resorts, but it was only operational from about 6pm to 10 pm. Then the restaurant closed and all the party-goers had to make do with candlelight or make a bonfire on the beach. The skies were star-spangled back then and blue phosphorescence would spray like diamonds in the sea when you splashed the waves. It was especially exhilarating when you were on hed kee kwai or “buffalo-dung mushrooms”.

The thing about the beach in 1987 to 1988, is that packs of mad dogs roamed at night, and there were muggers and the occasional shooting. When there was no moon you couldn’t see a thing and few travelers — for no! we were not backpackers or tourists back then, oh no! — would sally forth down the corridor of darkness along the shore. But on full moon nights, well, that was a different story. The beach became shrouded in a blue mist. The sand glowed silver and the waves danced alive as they hit the shore. Humans emerged from their slumber and re-inhabited the beach. The dogs took shelter in the bushes and everyone set about dancing and ‘shrooming the night away under the beautiful blue moonlight.

Then in the summer of ’88, electricity lines were laid from the main town of Na Thon and each bungalow resort paid the tea-money to get hooked up. Some farang hippies (for there was many an old head in those days) came to me to complain about the advent of electrical power, calling it “colonialism” or “butchering the Thai culture” and stuff like that. I told them I was powerless and that all the staff desperately wanted to watch soap operas on telly, but they wouldn’t listen. The old heads saw electricity as part of the incoming juggernaut of commercialization and clean-shaven tourism that had followed them around the world all their lives.

One bungalow resort, Arabian, started doing fantastic all-electric dance parties twice a week. But a few old dudes said they were through with Koh Samui and got a hold of some tents. They said they were going to get a fishing boat to take them to Haad Rin and hang out there where there was no goddam electricity to spoil things.

Anyway, not to be a party-pooper, I told the lads (two Dutch guys, two Swedes, two or three Brits, a couple of flaky American hippy chicks and a gaggle of half-naked Scandinavian girls) that I would come over at full moon and join them. They went over, set up tents on the beach, built a bonfire, and scowled across the Siamese Gulf at the twinkling tinsel town across the bay.

The other point I would like to make in retrospect is that several bungalow resorts and bars are today claiming that they were, in fact, the originators of the Full Moon Party. Paradise Bungalows is one of them, and a couple of other claimants reside on the sunset side which, as far as I know, at that time had nothing whatsoever except unkempt trails and jungle. I don’t wish to dismiss their claims. Maybe a parallel party was going on at the same time. I doubt it, but it’s possible. We were too wasted to realize if it was anyway.

The night itself was unspectacular but at the same time momentous. Having a great gathering of characters in a tightly-knit scene was much better than dancing to Peter Gabriel’s “Sledgehammer” over on Samui by a long chalk. We had about 20 souls, maybe 25 including a couple of Thai locals, and a few faces that somehow appeared in the middle of a trippy night.
We had tents, sleeping bags, some crates of water, Coca-Cola and some food. I think we had some Singha beers as well, but not many. Perhaps a bottle of Mekong [whiskey] or two for some. Not much alcohol at all; certainly no buckets. For the majority, it was ganja-smoking rituals by the bonfire followed by magic mushrooms and an evening of getting naked, splashing in the sea, and dancing around imaginary Stonehenges. It was pretty groovy, if truth be told.

We had a couple of old gurus — one Aussie guy who spent 10 years in India and went by the name of Sai-roong (Rainbow). He wore a snake in his dreads and spoke of Shiva in brotherly terms; another was a morose old German hippy from the ’60s, Ralph, or Rama, who just smoked and smoked bong after bong, and nodded occasionally or muttered “Ja! Ja! That was the way it was back then!”

Me? I tripped the light fantastic and finally bedded down on a sandy sleeping bag with a Swedish girl called Lotten. The next day, I rolled up my sleeping bag and said ciao to the gang, and the fisherman took me and a couple of others back to Samui where (we secretly knew) we would have coffee, muesli, banana pancakes and a nice hammock waiting.

Several of those guys stayed for months, I heard. I became too busy with my own business to go back over, though every month I pledged that I would. I did send lots of travelers over, but in the long run I could see that the hippy ambience was being replaced by the new wave of the ’80s gap-year traveler.

The two Swedes, who I am barely in contact with these days, went on to sell ecstasy (a new invention in late ’88) and acid. In the December or January, a gang of Phangan locals chased them off the beach with machetes, after stealing their drugs of course. Don’t know what happened to Lotten or the Brits or anyone else. At least 10 of them stayed over there for a few more Full Moon parties. But by that time, as I say, ecstasy had arrived and techno music was blasting out and no one wanted to sit around a bonfire discussing the merits of Shiva and Vishnu any more.

By mid-1989 Haad Rin was an electric party too, and droves of young heads were turning up and zoning out as if it were Woodstock. It was a historical time in many ways. The Berlin wall was coming down and the world was in flux.

And we were there.

A BIG thanks to Charlie Campbell and Time.com 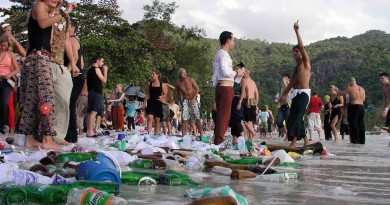