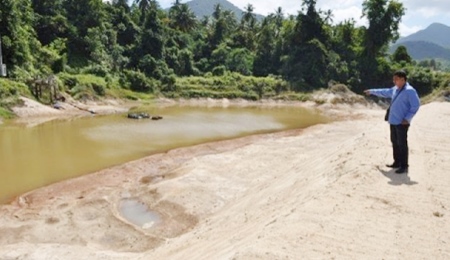 The Royal Irrigation Department is considering building a subsurface dam, the first of its kind in Thailand, on Koh Phangan to address freshwater shortages on the popular tourist island.

He said a department feasibility study found Koh Phangan was built on granite and sandstone, which can retain groundwater and serve as a natural aquifer. The geological strata was suitable for the construction of subsurface dam.

The system will store groundwater with a “cutoff wall” driven deep underground to block a subterranean channel. The bottom exceeds the floor of the water supply and, depending on the depth of the groundwater, the top of the dam may be exposed above ground.

He said officials recently met with community leaders and residents to listen to their opinions on the project. The meeting was attended by Mr Yongyuth, RID engineers and chief of the Koh Phangan district office, Krikkrai Songthanee.

Mr Yongyuth said if residents agree with the project, the department would invite experts from Japan to help prepare for the large-scale construction that would be required and attempt to minimise theenvironmental impact.

Japan is home to the world’s first two “mega” subsurface dams — named Sunagawa and Fukuza — which were built in 1988 and completed in 1993 on Miyako Island, the largest and the most populous in Okinawa prefecture, to solve drought-related water shortages.

In addition to storing groundwater, subsurface dams also have the effect of blocking seawater from fouling freshwater supplies and can include other facilities such as wells, intake shafts, and pumps to draw groundwater to the surface.

Unlike a surface dam, advantages of the underground version are that the environment above the dam is left intact; land subsidence is minimised due to support provided by the stored groundwater; and there is no risk of danger to people or property from a dam collapse or breach.

Mr Krikkrai said the subsurface dam would be the first such project for the RID and Thailand and its budget is estimated at 400 million baht.

The project currently is in the environmental-impact assessment stage and public comment is being sought, he said.

Thank you to Bangkok Post “Thailand’s first subsurface dam eyed for Koh Phangan ” which was brought to us by Google Alerts.