Skip to content
You are here: Home > General News > British woman, 22, may lose her leg after horrific motorbike crash on Koh Phangan island 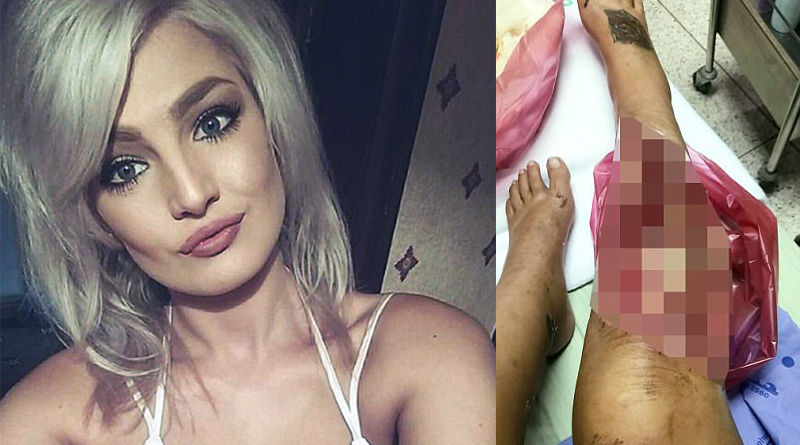 A British tourist could lose her leg after she sliced it open in a horrific motorbike crash on Koh Phangan Island in the south of Thailand.

Jenni Evans, 22, was travelling through the country with her boyfriend Joe when the pair came off the bike on the island of Koh Pha-Ngan.

Jenni, who suffers from Crohn’s disease, is now stranded on the island of Koh Samui and may need an amputation if her family cannot raise £100,000 to fly her home for treatment.

Jenni’s mother Andrea is terrified the cut could get infected and warned the spread could be ‘life threatening‘.

‘She’s scared and in pain and she needs to be brought back home,’ said a worried Andrea. ‘She needs to start treatment for her Cohen’s disease in the next few weeks.

Andrea, 53, from Barnsley, South Yorkshire, went on: ‘Jenni was a passenger on the bike but due to some kind of misunderstanding about British driving licences she was not insured to be on the bike.

‘She has suffered from Crohn’s disease since she was 13 so she took out specialist insurance to cover that but they won’t pay for her to come home now.

‘Any reasons about why Jenni isn’t covered would be just speculation at the moment.

‘We’ve looked at her insurance and read all the small print and we can’t see what the problem is.

‘We need to get her back as soon as possible. Anyone looking at that picture of her wound can see how horrendous it is.

‘At the moment Jenni is incredibly exposed to infection and there is a real risk she could lose her leg.

She is currently in a government hospital on Koh Samui and her family is now trying to raise GBP 100,000 (THB4.4 million) for medical evacuation to fly her home in hopes of saving her leg, which is infected and in danger of requiring amputation.

Her friends have set up an online crowdfunding page that has already raised GBP23,000 (THB 1,025,000) from over 1,100 donors. Her mother said, “Jenni is incredibly exposed to infection and there is a real risk she could lose her leg. If the infection spreads it could be life-threatening. This is a terrible accident that could have happened to anyone.”

In a message on Facebook, Jenni said, “Thank you to everyone for their love and support, I am so overwhelmed. “You don’t realise how much it means to me, you are literally keeping me going. It was never my intention to have to look to anyone for help through this as I thought I would be covered by insurance but what a relief and morale boost it is to see how much you have been willing to help. I just feel speechless. Thank you again everyone, I cannot tell you how grateful I am.”

Thank you to DailyMail “British woman, 22, may lose her leg after horrific motorbike crash on Thai holiday island” which was brought to us by Google Alerts.