It is indeed true what the jungle drums were telling after the last Full Moon Party in April 2004 at Haad Rin beach on the south coast of Koh Phangan Island. The rumor on the street was that there was a gunfight early morning at Paradise Bungalows! And now it’s official and there’s no more doubt about it anymore!

Three young male Thais from Bangkok got shot in a gunfight early morning around 6 a.m. at Paradise Bungalows. Directly at the beach surrounded by thousands of tourist enjoying the world famous Full Moon Party on Koh Phangan Paradise Island.

Later on that morning around 7 a.m. the local Thai Police shut down the Full Moon Party and that happened so far as I can remember for the first time!

Do Not Dehydrate! Full Moon Party at Hadrin Beach on Koh Phangan Island 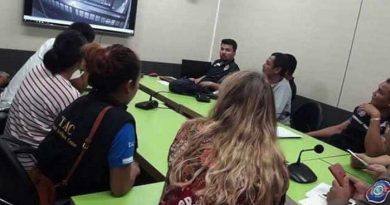