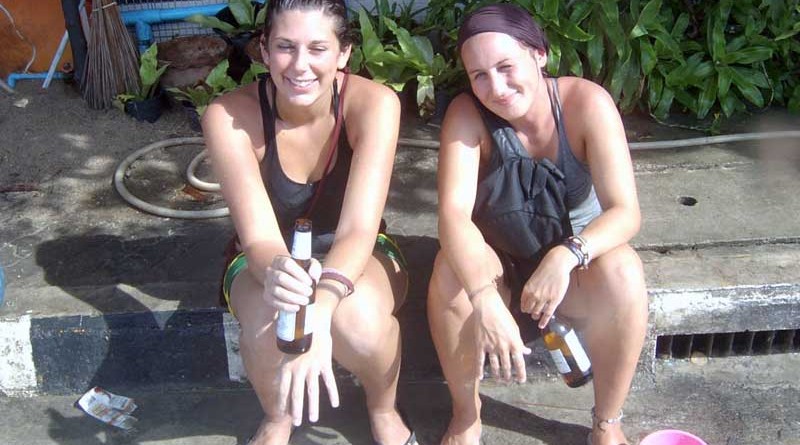 First of all a happy, lovely and awesome New Year to all Koh Phangan lovers out there!

Songkran Festival April 13th – that’s of course a day you should mark with a bright color when traveling to the island of madness, Koh Pha-Ngan, in the Gulf of Thailand. Originally Songkran means the beginning of a New Year in the Thai Culture and that’s also the reason why you hear a lot ‘Sawadee Pee Mai’ that day, simply wishing you a Happy New Year.

Songkran also means tons of liquid! First they normally start with plain and simple water and later on that day most Songkran participants switch to other kinds of available liquid, like Chang, Singha, Heineken, Saeng Som, Vodka and Red Bull. That’s also how many Songkran reveler look late afternoon … like a drunken red bull 😉 Exactly around that time Becki normally decides to quit the show as things tend to get a bit nasty and out of control, like it most happens if massive amounts of people gather together to celebrate the let’s get fucking wasted mentality.

This year’s Songkran Festival was also sort of a special one, like it happens every 12 years, as it was celebrated together with the island’s monthly top event – the world famous Full Moon Party at Haad Rin beach Koh Phangan. Somehow Becki didn’t go to investigate the usual suspects at world famous Full Moon Party Zone Haadrin but the next day I had a short look at the Full Moon After Hour at Baan Sabai in Baan Tai village. And I have to report the Baan Sabai After Hour Party was totally empty! Probably most red bulls went to the After Hour Party at Backyard where they also start charging an entrance fee of 100 THB now, reliable sources told Island News Headquarters. But the good news is that you can easily use the side entrance at Backyard so free partying is guaranteed! And always remember … DO NOT DEHYDRATE!

Over the last couple of weeks in this year’s high season Becki also met lots of suspicious strangers on the streets asking me – Are you Becki? Are you the guy doing this Island News thing? Well … that’s me 😉 And it was really nice meeting you all and actually realizing that there are indeed some bizarre life forms out there in the World Wide Web who enjoy reading my obscure articles about the island of madness, called Koh Phangan. Thanks a lot for your support!

Then … also in the last couple of weeks, Becki received lots of even more suspicious emails with some stupid content like, is anyone maintaining this website? Where are the new Full Moon Party pics? When are new articles posted? Etc … etc …

Well … to actually tell you the awful truth … KohPhanganNews.org is managed, maintained and updated by only one single entity! This bizarre life form is me … Becki! And to be honest it’s sometimes a lot of work to maintain and update this great website. Actually I do love maintaining Koh Phangan Island News and I personally think I will never stop doing so, but on a regular base I also receive very questionable letters in my P.O. Box! One is from a so called electric company asking for a couple of hundreds of Baht, the other one from a telephone company and then another one from my ISP, this Internet Service Provider, and so on and so on …

Fact is that these companies always ask for the same thing over and over again … MONEY! So, around 15 years ago when I first came to this island, the money thing could be managed quite easy. Every time I came back from Europe I brought some fascinating little things along with me. Like a colorful marble, a digital watch or even an electric can opener! These very helpful toys were then distributed amongst the local Thais and a constant source of food, water and other helpful things was guaranteed for a specific time.

But as globalization and capitalism moved forward into some hidden regions in the Gulf of Thailand the local Thais couldn’t be any longer satisfied with some stupid and colorful toys from the so far western world! The locals then just kept asking for the very same thing over and over again … MONEY 😉

So … in case of money and the so called ‘Real World’, Becki sometimes needs to actually do some proper work to finance my daily living and other hobbies of mine, like Satanic Rituals, Tantric Sex and other exclusive brain altering programs! That’s then mostly the time when I start creating other amazing websites like Backpackers Thailand or EMP-EasyCare! Develop improved online booing systems for Bungalows at Thansadet Beach and update existing websites about Scuba Diving on Koh Phangan. Or read stupid documentation about administrating Linux systems, Mail Servers, Databases or educate myself a bit more with object oriented programming in PHP!

But the final solution is just one click away! SUPPORT US! Donate your life savings to Koh Phangan Island News! HELP US! This guarantees you a well maintained and up-to-date news website about Koh Phangan, the island of madness in the Gulf of Thailand.

Or finally start participating in this global experiment! Sign up for your free account and start posting the awful truth about the island of madness – DO NOT HESITATE! 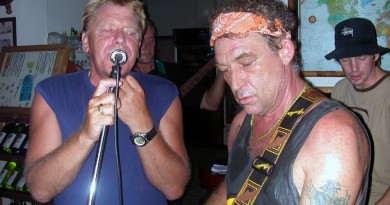 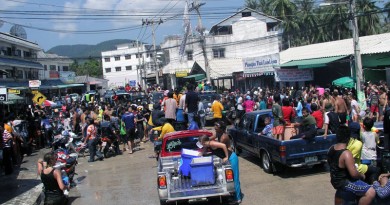