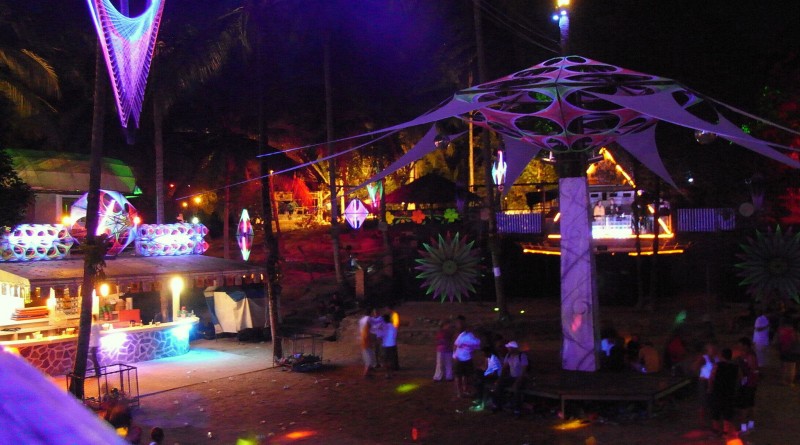 Baan Tai village, located directly at the south coast between world infamous Full Moon Party beach Haad Rin and main town Thongsala, used to be a quiet little village where life was still livable and everyone could enjoy the tranquil and relaxing nature far away from any touristic hotspots on the Island Of Madness formerly also known as Koh Phangan Paradise Island.

But as nothing is more permanent than change little & quiet Baan Tai village has been finally transformed over the last couple of years into something someone could easily call a Techno Party Battlefield.

On the daily Baan Tai village techno party menu we got all sorts of different ‘Come and Satisfy Your Soul’ style Techno Parties like, the Half Moon Festival, The Black Moon Culture, The Jungle Experience and our beloved evil Shiva Moon Party Family.

And for the ever hungry Techno Party Alien we finally managed to allow the Baan Sabai Day Party to happen which offers day and night after hour parties nearly every day during the high season directly in Baan Tai village.

But as monkeys see so monkeys do and sooner or later even not the shiniest village brainiac finally figured out that there is loads and loads of easy money to make with organizing so called ‘Come and satisfy your soul’ style techno parties.

So before the village people could realize what was going on new Techno Battlefield Parties popped out of the ground like Phangan Magic Mushrooms on a moist and humid Sunday morning.

Magic mushroom types like The Jungle Experience, The Baan Sabai Day Party, The Evil Shiva Moon Party Family, The Dark Psy of the Moon and probably more to come in the close future?

So at one point local village people got upset because of the lack of sleep and went to local Koh Phangan Authorities and asked for help. But at that point it already was far too late … the money driven techno virus had already spread and infected especially those authorities who are supposed to make sure that law and order is in place.

Local village people collected signatures, filed complaints at the local police station and district office, had an endless number of meetings with local authorities and party organizers, published articles in the main Thai newspapers but only to finally realize that there is indeed no law on the Island Of Madness.

Instead the Thai Law, of course strongly protected by local authorities, can be seen as a rough guide on when you have to start paying money to the local cops and administration office to turn a blind eye on any situation.

You wanna do some all night techno party? Well … the law says you have to close at 2 a.m. but if you like we could arrange a special package deal for you 😉 Just hand us over those tiny printed sheets of paper and we will make sure everything goes as planned. Shut down at 2 a.m.? No worries 😉 Smoking weed? Well … who cares 😉 Drugs? Ah … get out of here 😉 And if the neighbors start complaining about the terrible noise we cause throughout the night? Neighbors … terrible noise … what’s that supposed to mean. We are the law … we take care of everything else … don’t you worry about a damn thing! We will make sure that your business is well protected 😉 Money makes the earth spin around the sun … just try to remember that!

Which brings us basically to our final message and Koh Phangan Island News Headquarters is more than aware that this will actually piss off many of the Techno War Party Organizers here on Koh Phangan Island. The techno party organizers will get angry … they will get upset … but so are we, the people living in Baan Tai village area, who are forced to live with the shit you party organizer have brought to our village even without asking us nor thinking about your neighbors in any way!

Your Techno Party War behavior is really more than disrespectful and now that you guys even know how your neighbors feel about your all night long bom-bom-bom techno noise disturbance you don’t even care nor show any plans to improve the situation in some way. Selfish disrespectful behavior or like the Thais call it ‘Hen Gae Tua’!

The village people have asked you nicely many, many times to improve this Techno Party Battlefield War situation in Baan Tai village. Local village people suggested many times that you move the Techno Parties out of the residential area of Baan Tai village but up to this point you simply still ignore the community around you and keep playing the game of power, money, greed and corruption like you are soulless humans while still propagating slogans like ‘Satisfy Your Soul’ or ‘Respect the Nature’!

What about the souls of the people living in Baan Tai village area? What about ‘Respect Your Neighbors’?

Finally because of the ruthless, disrespectful, dark aura behavior of the local Techno Party organizers and the non-existent willingness to improve the current situation Koh Phangan Island News headquarters has finally decided to banish ALL techno Parties in and around the residential area of Baan Tai village!

and probably more to come!

* Loud & terrible noise disturbance throughout the night until late morning!
* Sleepless nights for the local community in Baan Tai village area!
* Even though party organizers know about the trouble they are causing no plans are yet established to improve the situation in any way!
* Disrespectful, ruthless & selfish behavior against the local Thai & foreign community!
* Or as the local Thais say ‘Hen Gae Tua’!
* Sponsoring of corruption and mafia like structures (local police & district office)!
* Destroying of local house rental businesses!
* Non-Human behavior!

Simply be aware, you dear techno hungry aliens, that hundreds of people are not able to sleep in a decent way, some people even have to leave their houses and find a place somewhere else to sleep, while you guys, with your chemical altered states of mind desperately try to satisfy your souls!

Please be aware of the trouble you are causing for the local community and DO NOT SUPPORT any of those ruthless & disrespectful techno parties. Instead try to start a discussion with local party organizers and point them to the right direction. Tell them that you would feel a lot better knowing that the local community will not suffer in any way. Please spread the word and create awareness to finally improve Koh Phangan’s Techno Party community – thanks!

There is always a better solution if someone is only willing to look for it. This is not about simply shutting down all techno parties on Koh Phangan Island. This is about improving things, respecting each other so finally all different communities can live peacefully and happy with each other. Does this make sense to you?